Hi, this is AJ here, there have been no new posts on this blog for ages cus my beautiful sister Phoebe went without warning to Rainbow Bridge in the spring, we haven't been able to come on here to post as it upsets us so, but I thought I had better let you know what had happened.

I just want to let you know that there are many new pics of my family at my mum's blog - http://badads622.blogspot.com/
You can also see a video of AJ and maybe others by the time you read this as she adds to it several times a week!
# posted by Ann @ 11:20 AM 1 comments

Last Saturday Phoebe and AJ attended the Bullies In Need Christmas party, they had a lovely time. Phoebe hasn't been too well lately so she spent most of her time watching the activities, AJ however was in the thick of things, he had his own 'minder' for the day and a 3 year old boy to play with so he was in his element!
They both went in the fancy dress competition, Phoebe wore a sailor dress and AJ won 5th prize in his devil costume, very apt for the little lad!!
AJ also sat on santa's knee and had his picture taken 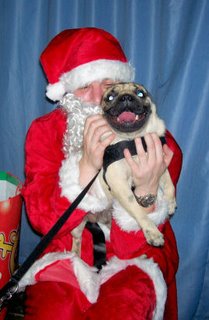 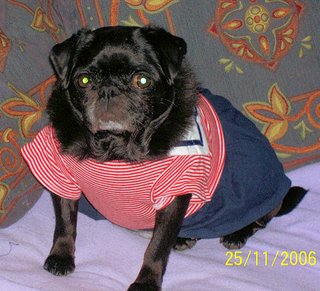 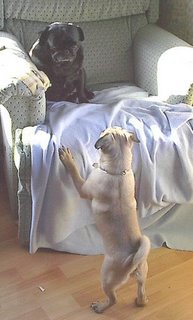 Well here at last is my baby brother AJ. After looking for a few weeks for a brother for me and being unsuccessful my mums decided they would have to get a younger boy. They wanted a more mature boy pug of around 3 or 4 years old, but there were none around at that time. They saw an ad for a little boy of almost 5 months old, his owner was having problems giving him the care he needed along with looking after her little girl. She wasn't in any hurry and wanted to find the right home as she knew that not everyone would be able to cope with his overactive behaviour, he was very much loved by his first family and they did find it difficult to part with him, but knew it was for the best. I am thrilled that they thought we were the right home for him. At the time his name was Archie, but as we already had an Archie we called him Archie Junior, AJ for short. I went with them to meet him so that I could be the one to decide whether he came home with us. In this first picture he was too small to get on the chair so I could get up here out of his way for a few minutes rest!
He is the most lovable rogue you could wish to meet, sometimes I do have to tell him off as he does get a bit much for me, but he is learning how much I will stand.
He is now 10 months old and very handsome! 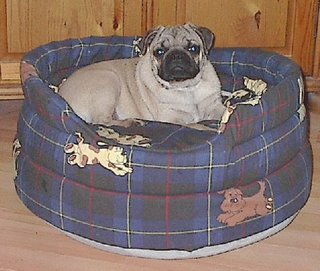 We are very good friends, and on the odd occasion when he does have a nap we like to have a nap together! 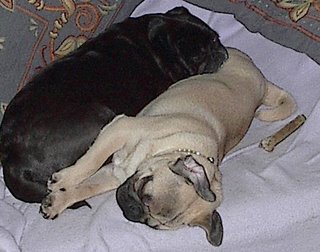 AJ loves everyone and every dog. here he is playing with Mitchell a bull terrier puppy, he was in foster care with a friend for Bullies In Need and came to visit us,
AJ thought it was great to have a playmate who was as rough as him!! Of course, the next time he saw Mitchell, Mitchell was twice AJ's size, he still wanted to play with him though!! 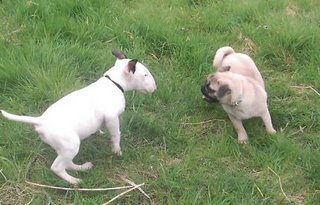 It has been a long time since I wrote in this blog and an awful lot has happened, some good, some bad.
Sadly my boxer brother Sam became a victim of the awful illness Degenerative Myelopathy and he gradually lost the use of his back legs, when he started to become frustrated and depressed he was helped to Rainbow Bridge to save him from further anguish, my mums say it was the worse thing they have ever had to do and I missed him so much that I became depressed myself.
My mums knew that I needed a special friend so they looked around for another pug to join our family, they wanted to find one about 2 - 3 years old but then found out about a lovely little lad of 5 months looking for a good home, so AJ became my brother. Now I am used to living a sedate life but AJ has certainly changed things in that department!!
I will get some pictures of him on here as soon as I can, he is now 9 months old and is a lot bigger than me!
Write more later.
Love Phoebe.
PS. My mum has got another blog now with pics taken on her mobile phone - there are a couple of pics of AJ on there - http://badads622.blogspot.com/

Monday evening was again beautiful and off we went in the car, this time in the opposite direction, through Mablethorpe and then Sutton On Sea , until we got to the golf course. We parked in the car park and climbed the steps and there was the beach, and once again the tide was in. There were a few more people about this time and several had dogs which were off the lead and they came over to meet me, it can be a bit daunting when 2 labradors come bouncing over to a small dog, I do wish their owners would take that into consideration, they then wonder why the smaller dog yaps at them!! I am not allowed off my lead when any other dogs are around as I am not trained to come back when called and my mums don't think it is right for me to go and interfere with other dogs on leads and they are also worried I may get hurt, compared to most on the beach I am only small!! Anyway, enough of the chatter, I am sure it is the pictures you have come to see! 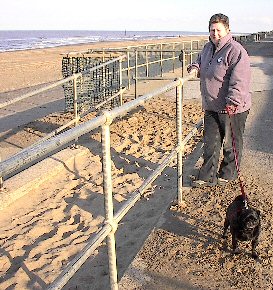 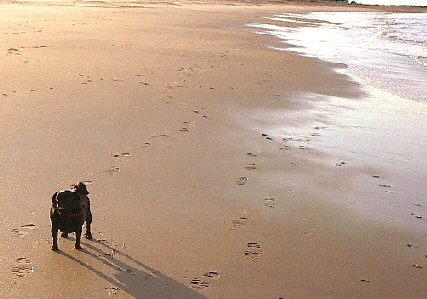 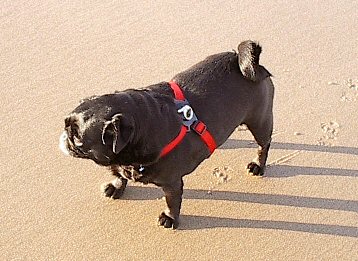 Grandad visited yesterday, after lunch we went for a walk at the nature reserve at Donna Nook. This is such a strange place, it is owned by the Ministry of Defence but managed by the Lincolnshire Wildlife Trust, it is still used as a bombing target range!! You can't go in there when the red flags are flying!
It is a very popular place for bird watchers, the reserve is rich in bird life. In summer breeding birds of the dunes include red-legged partridge, dunnock, whitethroat, linnet, skylark, yellowhammer and tree sparrow. The mudflats provide a winter home for substantial numbers of brent geese, shelduck, twite, lapland bunting, shore lark, large flocks of knot and dunlin and a wide variety of other wading birds. Donna Nook has one of the largest and most accessible breeding colonies of grey seals in the UK. Pretty knowlegable little pug aren't I?

Here we are after we have just left the car park; 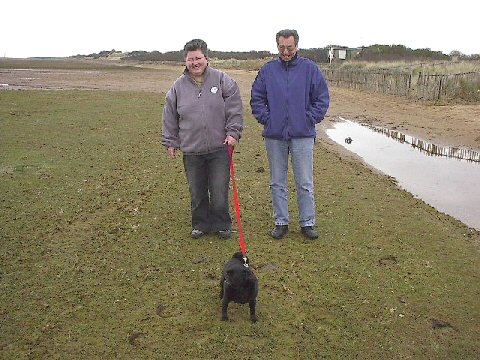 Believe it or not the sea is over here somewhere! 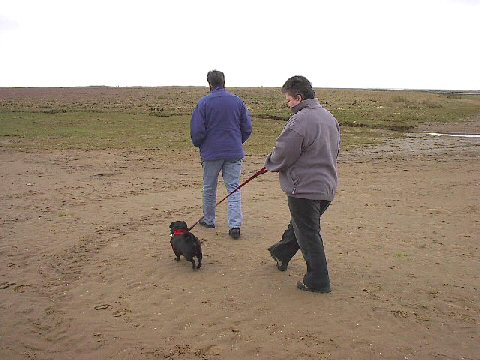 Here I am investigating; 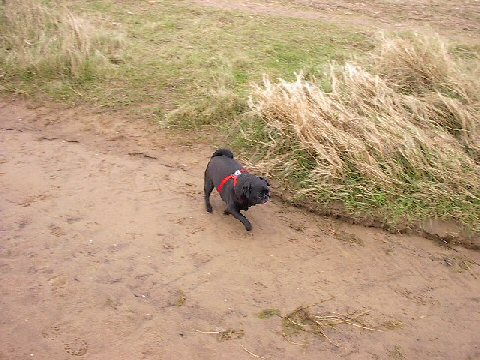 Just having a quick shake, this sand gets everywhere! 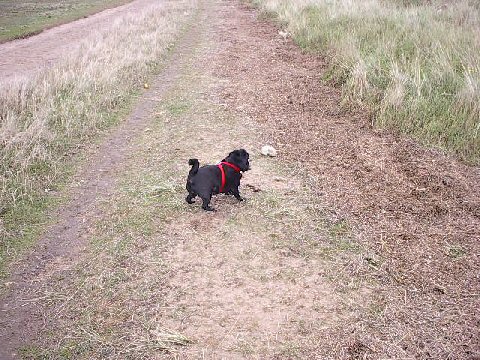 Pugsley is also interested in local wildlife, he has been walking in Whitwell Woods this morning, here is one picture of him there, and there are more if you go here: http://www.bull-terriers.co.uk/pugs/pugsley2.htm 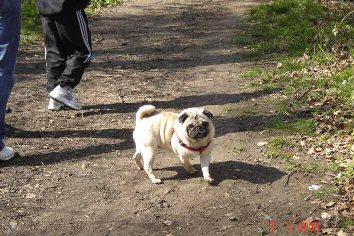 Apart from looking after my pets most of my time is taken up co-running 'Bullies In Need', a UK rescue and rehoming organisation for bull terriers. I am responsible for finding the money to pay for all of those hefty vet bills we run up each month and also for keeping the web site up to date!! Fund raising is a time consuming practice, so it doesn't leave me with an awful lot of spare time, I now have an embroidery machine which I use to decorate various clothing items to sell to raise funds, it has been very successful to date. If you would like a personalised item please do get in touch. I have designs for almost every subject under the sun, inclusing most breeds of dog

I love to read your comments, to leave them just click where it says 'comments' under each entry. thank you.